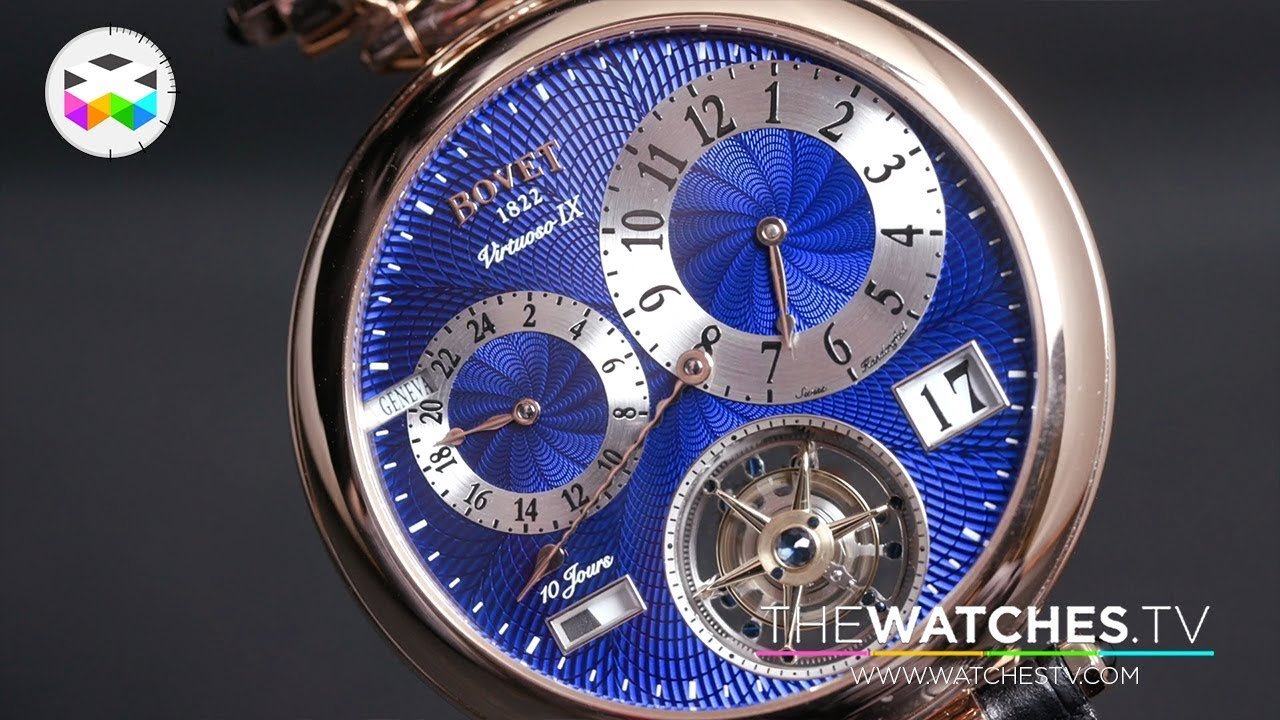 We’re back in our club space here in the middle of the old town of Geneva and we have a few more reports coming your way and we will with the main new timepieces introduced by Bovet for their very first SIHH participation, previously they were hosting press and retailers in one of those fancy Geneva palace by the lake. Well could have it been any better for Bovet to mark this first presence with the Golden Hand received in late 2018 at the GPHG for best of the best standing proudly in the middle of their booth, something underlined even further by having golden molds of some of their artisan’s hand holding the watches in the showcases presented to the public.

Anyhow, good for them and personally I think it feels just right for Bovet to be part of this event. Ok let’s now talk watches and surprise surprise well Bovet didn’t disappoint either with the introduction of quite a few timepieces and we’ll start with the Virtuoso 9, a double time zone tourbillon seen here in its 46mm red gold case, but white gold and platinum versions do exist, and despite this rather large size it doesn’t really feel like this and there’s really a design coherence. This timepiece comes in a Fleurier Amadeo case, meaning that it’s convertible to a desk clock or pocket watch, a true signature of the house and technically speaking this is kind of a regulator with a central minute hand and an off-centered hour dial at 2 o’clock and second indication found naturally on the tourbillon.

It holds 10 days of power reserve, a nice and convenient feature for sure with a sliding indicator seen at 8 o’clock, and you will find a 24-hour dial at 10 o’clock displaying the second time zone with a small guichet which lets you see the actual time zone you will have selected. On the other side of this timepiece, because it’s hard to say the case back since this is also a dial in a certain way with centered hour and minute hands and again the second on the tourbillon, but this side shows a very original bi-colour blue and rhodium mouvement construction, something nonetheless classical since it refers to a bi-colour technique used by Bovet in the 19th century.

Next timepiece is the Récital 21, a rather original perpetual calendar coming in something which is also becoming a signature of the house with this asymmetrical case referred to as a writing desk, something seen previously with the Récital 18, 20 and 22. Ok, I know it may sound a bit bizarre, but having this small angle when you’re looking at your wrist changes something, as if your brain subconsciously tells you it’s easier to read the indications, strange. Anyhow, well you will find a small hour and minute dial right in the center of this watch “surrounded” by a retrograde date indicator and other calendar information are found at 12 o’clock for the day, at 6 o’clock for the month and at 3 o’clock for the leap year indicator. At 9 o’clock you will find a small co-axial second and I really like this snail shaped “côte de genève” on the dial. This timepiece comes in red gold or titanium, holds 5-day of power reserve and is rather surprising to look at when you flip it around with this inclined movement. A very original perpetual calendar.

Ok, next creation presented by Bovet is the Récital 23, a lady’s timepiece taking for the first this this sloped writing desk case feature I was mentioning before, but this time with an oval shape execution, the case being 43mm in height and almost 29mm in width. This shape allows to have a slightly off-centered hour and minute dial on the lower part and display a beautiful dome shaped moon phase indicator in the upper part at 12 o’clock, something previously seen in the Récital 18 and I think it’s a smart way of reusing this, like a further affirmation of the design codes of the brand. The Récital 23 comes in three case versions; red gold, white gold and titanium, each of these available either with a guilloché mother of pearl or an aventurine dial, so a total combination of 6 models. Nice watch but this now leads me to the big launch or let’s say the spectacular launch of the brand with the Récital 26, the first time the brand goes down the route of fully sapphire cases. Ok, we’ve all seen sapphire cases before, but coming from Bovet could be seen as something slightly odd, but the result is really quite an achievement.

The Récital 26 features the brand’s double face flying tourbillon, a moon phase indication similar to the one just mentioned before, 10 days of power reserve with an indicator found at 4 o’clock, a big date at 8 o’clock and there are actually two types of dials available, a blue translucent quartz version and a open worked type version carved out of aluminium, but you will also be able to ask for customization of this. But I now want to talk more in details of the case itself, because this one is made out of one single sapphire block and represents something quite unique and particularly hard to mill when for instance you see such intricate details such as the slightly curved flanks of the case. Naturally it again uses this writing desk shape and Bovet has found a pretty clever way of “attaching” it to a titanium chassis with the lugs incorporated to it and this is actually a really smart solution, had never seen something like this before.

And another detail which I really like concerns the movement architecture, since the various bridges and main plate are found on different levels. Unlike the Récital 21 where the entire movement is inclined, well this one uses the space available to mimic the case’s asymmetry, something totally relevant with the see through aspect of the timepiece. So the full name of this watch is the Récital 26 Brainstorm Chapter One, which I believe means that we will see other versions of this timepiece in the future.

Ok, this is it for Bovet’s main novelties, but I just wanted to add that we were also able to see some beautiful métiers d’art versions of the Amadeo Fleurier 39 and 43 with some really beautiful dials featuring micro-painted dragons and they are a real pleasure to see really up close, the details are just amazing. Ok, I hope you enjoyed this and we still have a few videos coming your way regarding this 2019 SIHH.