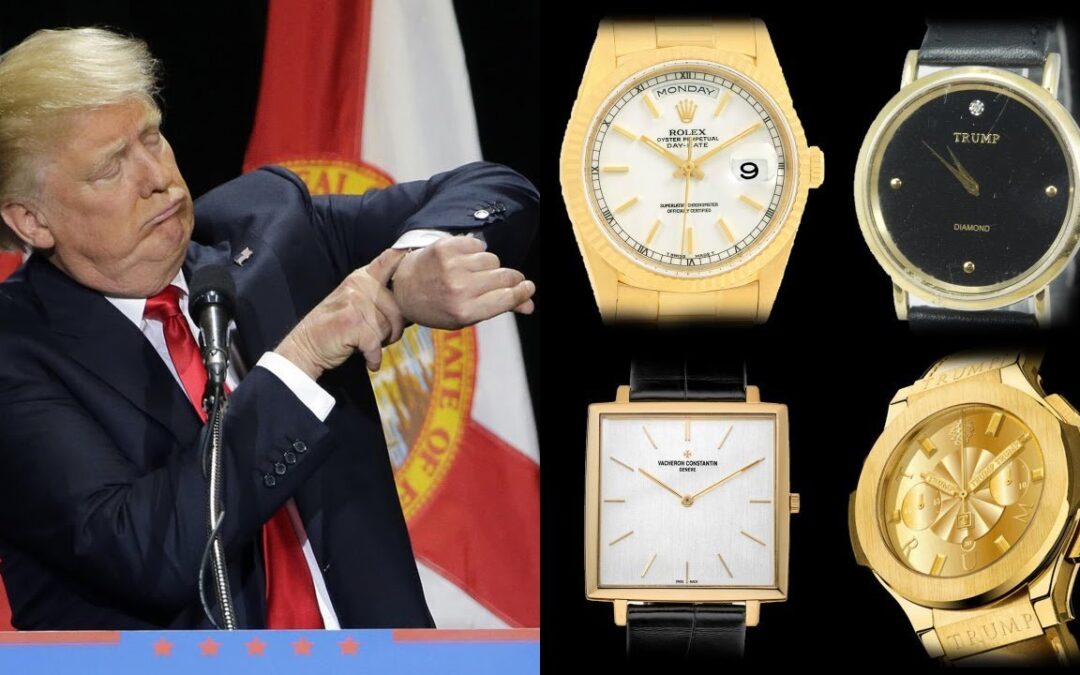 So first thing I wanna point out is not about politics, OK? In no way, shape or form. This is solely and only about Donald Trump’s watch collection. So the first thing I wanna point out is that based on all the pictures that I looked at on the Internet and what I was able to dig up on Donald Trump, he doesn’t tend to be too much of a watch guy. He kind of seems to be more of a one-watch type of guy. So the only watches that I tend to see him wearing is gonna be a Day-Date in yellow gold, 36 millimeter, very Presidential. Very standard watch for someone of his age and then also a Patek Philippe Ellipse, but that’s pretty much it.

I’m not gonna lie. I’m a little bit shocked that for somebody that it’s so gaudy and over-the-top, I mean have you ever seen some of the lobbies at those Trump hotels and stuff like that. They’re very over-the-top, very gaudy. I’m quite surprised that he doesn’t have more gaudy watches, but I don’t know, maybe he’s not much of a watch guy because two watches? There are people out there that are one-watch type of guys and I respect that.

He might not be so heavily into The Game or obsessed with watches as perhaps I am, but I don’t know. I just thought he would be a little bit more gaudy, maybe a little bit more bling or a lot more gold. I mean, the Patek Ellipse that he has is all yellow gold with a blue dial and we have never really been able to get a real clear shot of what dial he’s rocking on that Presidential. But here’s the funny part to me. For somebody that doesn’t seem to really be an honest, real-deal watch collector, why the heck would he open up his own watch line? I don’t get it. I just purely don’t get it! Now, I’m not the smartest man in the world, OK? But I would say that if you’re going to dedicate the time, energy, money, whatever it is the sole end purpose that you want, whether it’s investment, fame or whatever, into a watch brand, I personally think that you should have at least some type of passion for watches.

Just saying. I don’t really think he does and there’s not a problem with that, but Trump launched a line of watches, which was a horrific mistake. I mean, the had a brand that pretty much lasted one year and was launched at…where at? Macy’s. I mean, they’re blatant knock-offs to some of the other brands. It’s pretty much, for example, he’s got one watch that looks like a Daytona, looks like a chrono except it’s not a chrono, doesn’t have no other buttons. It’s just like a blatant knock-off of that. I mean, what’s up with that? Wait, my favorite part is that all his watches say Trump like this big, OK? Like this big across the dial. Then he’s got this other one that’s like a direct ripoff of a Big Bang. I mean, are you kidding me? And then it’s gold on gold on gold. I mean, very fitting for him, but…I don’t get it. I’m very perplexed by this.

I don’t know if somebody in his venture team sold him this idea or what it was, but again, I don’t see a problem with anybody doing anything by that mark, but if he wants to launch a watch brand, I just think he should have had a little bit of passion behind it because that’s gonna make it better. You know, these are some of the watches that he’s had on there in his collection, I mean and they’re not really the best ones. And this particular picture…what the heck is going on here in this picture? I don’t even know! So in conclusion, I think that Donald Trump is more of a one-watch type of guy in his collection. Who knows what’s the story on the Patek? I feel like the 36 mm Presi is very fitting for him. I just feel like that kind of is the watch that would fit him best. I don’t really see him as much of a watch connoisseur. Listen, I’ve looked at the Internet. I tried to find some pictures of him man. I was looking at pictures on the golf course.

I even saw a couple of pictures that were disturbing. But I really didn’t see him with any watch. I mean, I’m not even talking about an Apple Watch, a G-Shock, a Citizen, a Timex, nothing! Maybe he’s just not much of a watch guy and I think that kind of was…I don’t know. That was strange. I kind of thought that he would be the type of guy that would have one of those full-blinged out Piaget’s, you know? I just thought he was more of that type of guy. And I had not really even looked at his watch collection or watch lifestyle until I decided to record this video. Another one that he has that I almost forgot to mention is he has a Vacheron Historiques 1968. Now, this is a squared case watch, real thin with an alligator strap. It’s a very dressy, formal watch. He used it on election night and he wears it quite often as well.

But again, I just kind of maybe felt that he would have more gaudy pieces, you know? I don’t know, it seems very simple. So pretty much Donald Trump’s score in the Watch Game is gonna be pretty much a 2. I mean, he’s shy from almost a 1 to be honest with you, you know what I mean? But anyways, feel free to comment below how you feel about making watch collecting great again. And also, don’t forget to hit the notifications bell till it looks like this, or otherwise, you miss my latest episode. And if you liked this video, please like and share. Also, subscribe to our channel. My name is Eric. This is Watch Your Style!.