The Epic Story Behind Ferrari and Lamborghini’s Rivalry 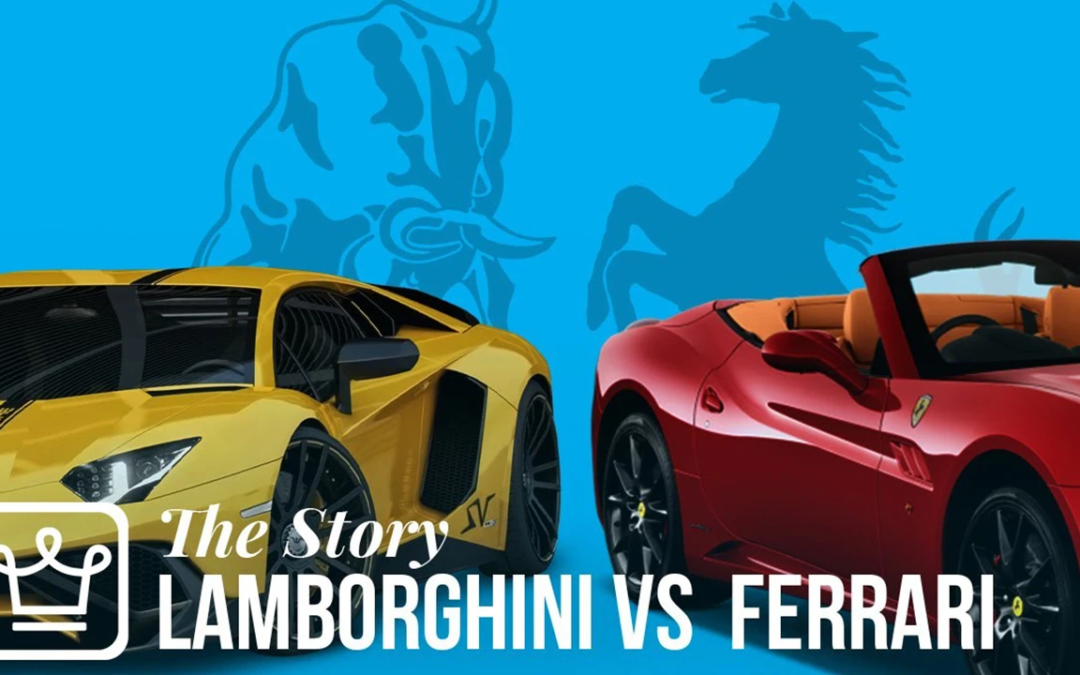 Ferrari and Lamborghini are two of the most iconic brands in sports car history. Ferrari was first on the scene, but ever since Lamborghini began building cars, the two have been fierce rivals. They are both based in Italy and are known for being luxurious, expensive, and fast.

For over 50 years, the two brands have been in a fierce competition with each other as part of a long and storied rivalry. Today we’re going to tell the epic story behind Ferrari and Lamborghini’s rivalry, but first, let’s look at where these brands are today. Based in Sant’Agata Bolognese, Lamborghini currently produces the Aventador, Huracan, and Urus and is also known for their Murcielago and Diablo models.

Lamborghini recently doubled production at their headquarters and manufactured a record 5,750 cars in 2018, which was more than double the previous year’s production. Lamborghini is valued at $11 billion, and this valuation is only expected to rise as new SUV and hybrid vehicles are introduced, widening the customer base while also maintaining their commitment to luxury and quality. Ferrari, based in Modena, Italy, is the oldest and most successful racing team in the world with the highest number of cumulative wins among all car brands.

Ferrari’s road cars also harness the speed of their racers with added elements of luxury and comfort. There have been a number of iconic Ferraris over the years, including the 250 GT, the Testarossa, the F40, the Enzo, and the LaFerrari. In June 2018, a 1964 250 GTO became the most expensive car in history when it sold for $70 million. Ferrari produced 9,251 cars in 2018, not quite double that of their rivals at Lamborghini. Revenues in 2018 topped $3.7 billion, and Brand Finance Global 500 named Ferrari as the world’s most valuable brand in 2019. Their valuation sits around $8.3 billion, lagging a bit behind their rivals. Now that we’ve covered some present-day facts, let’s go back to where it all began for these two luxury brands about 80 years ago. The story begins with Enzo Ferrari, who dedicated nearly his entire life to designing and building sports cars. He established his own car manufacturing business in 1939, but World War 2 interrupted operations. The first Ferrari branded car was the 1947 125 S. Although he was more interested in building racecars, he reluctantly started producing road cars to help fund his racing passion.

The 125 S became the first Ferrari to win a racing event at the Rome Grand Prix in May 1947, the first of more than 5,000 racing victories Ferrari has claimed since. At this time, Ferruccio Lamborghini had never even dreamed of building a car. He was from a family of grape farmers, but he was always more interested in mechanics than agriculture. After World War 2, he noticed that there were plenty of discarded military vehicles with parts just available for the taking. He used his background in agriculture and his interest in mechanics to build his first tractor from parts sourced from those vehicles. In 1948, he officially created an agricultural machinery business called Lamborghini Trattori, and his business was an immediate success. For the next 15 years, he focused on building tractors. His business brought him a considerable amount of wealth, and he ended up buying several cars, including a 1958 Ferrari and that fateful purchase would be the birth of a fierce rivalry that continues to this day. Lamborghini enjoyed driving his Ferrari, but with his expertise in mechanics, he felt like there were a few improvements that could be made.

The main issue was the clutch that needed to be repaired often, but he also thought the car was too noisy and ran too rough. He decided to take his complaints straight to Enzo. After listening to Lamborghini’s complaints, Enzo thanked him for his insights and the two became best friends—just kidding. Enzo was insulted that this man who had never built a car was telling him how to do his work. At the time, Enzo was arguably the top manufacturer of luxury sports cars, so he wasn’t about to take criticism from somebody who wasn’t even in the industry. Instead, he told Lamborghini that the problem was with the driver, not the car. He further told Lamborghini that he should stick to making tractors and leave the cars to Ferrari. Now Lamborghini was the one who was insulted. He took Ferrari’s words as a personal challenge. Then and there he made it his mission to build a sports car that was superior to Ferrari’s.

While Ferrari went on with business as usual, unaware the rivalry had begun, Lamborghini started working on his own sports car with a V12 engine. Lamborghini had already become a successful man, and most who knew him didn’t think he had any business competing with Ferrari. Ferrari was the king of sports cars at that time. He had years of experience on Lamborghini, and he was very confident in his cars. Most people, including Ferrari himself, did not think it was possible to build a better car than a Ferrari. But Lamborghini dedicated himself to the task, and he introduced the Lamborghini 350 GTV at the Turin Motor Show just four months after his altercation with Ferrari, in October 1963. He received widespread acclaim for the Muira sports coupe, which was introduced in 1966. This made the Lamborghini name a respected part of the sports car industry. Once Lamborghini proved that he could indeed compete with Ferrari in terms of power, style, and luxury, the two continually tried to outmatch each other in their car and engine designs.

It seems that Ferrari held a grudge more so than Lamborghini. Ferruccio later said, The last model that Enzo launched before his death was the Ferrari F40 in 1988. He passed away later that year. Lamborghini, on the other hand, sold his company during the 1973 worldwide financial downturn. After going bankrupt and passing through a few different hands, including the Chrysler Corporation, the company finally found a stable home with the Volkswagen Group in 1998. After selling the company, Lamborghini retired and later passed away in 1993 at the age of 76. The rivalry has endured long after the two stopped competing directly against each other and has now been an ingrained part of both companies for over 55 years, and there’s no way it’s ending any time soon. There are a few lessons we can take from this rivalry.

One is that you shouldn’t underestimate your competition. The other side of that is that when people dismiss you or doubt that you can achieve your goals, you should use this as motivation to push you even further. Competition can be healthy. As the saying goes, iron sharpens iron. This rivalry inspired Ferrari and Lamborghini to push themselves to try to outperform each other. If you can find someone like this in any area you’re trying to succeed in, this will likely encourage you to achieve more than if you block out all the competition. And Aluxers, if you’re interested in learning more about another rivalry Ferrari was involved in, check out the book Go Like Hell: Ford, Ferrari, and Their Battle for Speed and Glory at Le Mans This book sells for over $25 and is exclusively available on Audible, but you can get it without opening your wallet. Just go to alux.com/freebook and sign up so that you can get the audiobook version for free thanks to our partnership with Audible! While researching his story, we’ve come across this inspiring quote from Enzo Ferrari we’d like to share with you that goes like this: Ferrari reminds us to never become complacent and to always be looking ahead to the next accomplishment.

Now that we’re wrapping up this story, we’d like to know Let us know in the comments. And, of course, for sticking with us until the end, here’s that bonus you’re waiting for: In 2002, Ferrari introduced the Enzo Ferrari in honor of their founder. Only 400 of these cars were produced, and in the years since at least 14 of them have been totaled. It’s bad enough that such rare cars have been destroyed, but it’s even more painful when you consider they cost about one million dollars each.