The Rarest and Most Expensive Cars in the World 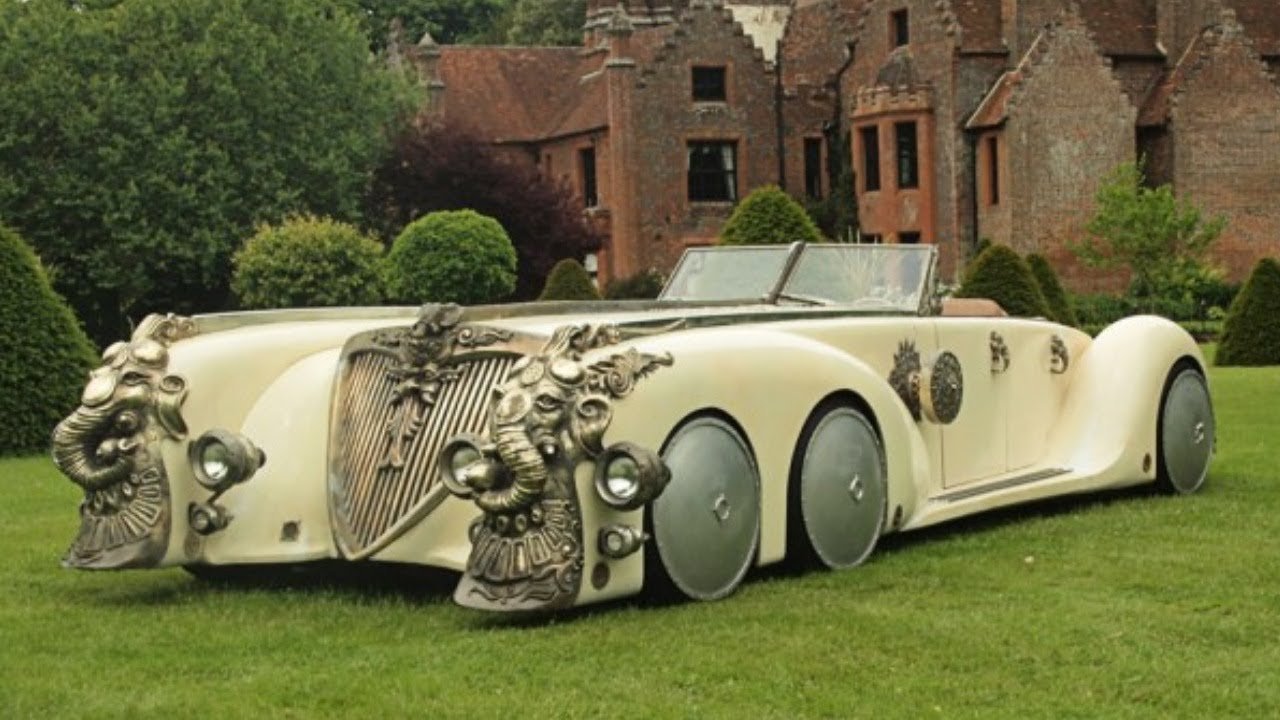 From special edition Rolls, to masterpieces of engineering, here are 10 of the rarest cars in the world…. 10. Mercedes CLK-GTR The Mercedes CLK-GTR was designed to take part in the new FIA GT championship series in 1997 and was built with a Mercedes-Benz LS600 6 litre, V12 engine. The car performed quite well in the competition that year, and as part of the terms of entry, Mercedes were required to produce a limited production run of road-legal versions. In total, 25 were made, all as true to the original design of the race car as possible. The engine was enhanced to a 6.9 litre version, and produced 604 horsepower. The company claimed that this allowed the car to reach a speed of 62 miles per hour in just 3.8 seconds, and a top speed of 214 miles per hour. At the time of its release, the CLK-GTR was the most expensive production car ever, costing a whopping 1.5 million dollars. This is a beautiful, and rare, vehicle, and even if you had the funds to buy one- actually finding one that’s up for sale would prove to be difficult! 9. 1905 Rolls-Royce 15 HP Rolls Royce is one of the most recognisable names in the world of automobiles.

They began making cars in 1904. Since then, they have been responsible for some of the most iconic designs, and branched out into other areas including aircraft engines! But it’s the classic luxury cars that stand out in collectors minds. This 1905 Rolls Royce 15 HP car is the second oldest vehicle by the manufacturer that remains in existence, and by far the rarest. Surprisingly, the last one of these that was made still works! Just imagine a brand new car that you bought today, still running in 120 years time, it’s unbelievable! It has a 3-speed manual gearbox with a 3.1 litre engine, and can reach up to 39 miles per hour- a significant speed at that time, I mean it is 122 years old! It may not sound like much now….

The company, though, was still in its infancy in 1905, so only six of them were ever built. The history and collectability associated with this car means that the insured replacement is approximately 35 million dollars. Yes, 35 million dollars!! 8. McLaren F1 LM I just saw a McLaren on the highway the other day! But I don’t know what model it was. This stunning car is the McLaren F1 LM. It’s a tuned edition that was built to celebrate the success of the track version in 1995’s Le Mans 24-hour race, with only a few alterations to make it road legal.

The car weighs only 2,341 pounds, and has a 680 brake horsepower engine that allows it to reach 60 miles per hour in 3.9 seconds, with a top speed of 225 miles per hour. Only six were ever made, all in the super original Papaya orange colour as a tribute to Bruce McLaren, who the company is named after, and his racing colours when he was a driver. The rarity and desirability of this McLaren means that it’s REALLY expensive. In 2015 one sold, at auction, for 13.75 million dollars. This is particularly high considering it doesn’t have any of the creature comforts you may expect from a supercar. To stay true to the original design, there’s stiffer suspension, no radio, and it definitely does NOT have any cup holders! And now for the Bugatti, but first be sure to subscribe if you haven’t already! 7. 1927 Bugatti Royale In the 1920’s, Bugatti saw an opportunity to sell a new style of luxury car, and designed the Bugatti Royale. To accommodate all the features they wanted to put in, they made the car 21 feet long! It remains one of the largest cars to ever be built.

With a 12.7 litre engine that produced up to 300 brake horsepower, no one ever tested it to see how fast it could go. At least not officially. Initially the plan was to build 25 of the vehicles to sell to the wealthy, but in the end only 7 were made. One of these was destroyed- leaving only six remaining, each of which was built with a different body, making them truly one of a kind. Most of them are now displayed in museums around the world, but one- known as the Kellner car, is still in private hands. It’s virtually impossible to put a price on how expensive one of these would be today, but the last time one sold in 1999, it went for 20 million dollars. 6. 1954 Oldsmobile F-88 GM Concept Car The Oldsmobile F-88 is thought by many to be one of the most influential ever made, and it’s now one of the rarest too. It was designed as a dream car in 1954, and was a project of love by American designer Harley Earl, based on designs by Bill Lange. It was built around the chassis of a Chevrolet Corvette, and had a body made entirely out of fiberglass. The two door roadsters had a super 88 V8 engine which produced 250 brake horsepower, and the style of design was the first of a new era of car aesthetics and the one that led the way.

Despite this, only four were ever made. Two became part of private collections and their whereabouts are unknown, one was destroyed in a fire, and the final car was used as a show car. It was sold at the Barrett-Jackson collector car auction in 2005 for three million dollars, and is now permanently on display, for anyone to see, at the Gateway Colorado automobile museum. 5. Lamborghini Reventon The Lamborghini Reventon hardly looks real, and turned heads when it was first revealed at the Frankfurt Motor show in 2007. Just as insane was the price at two million dollars, which made it by far the most expensive car that the Italian manufacturer had sold at the time. To create the Reventon, they had designed a completely new exterior, but used very similar mechanical designs as seen in the Murciélago LP640.

The 6.5 litre V12 engine gives the car a maximum top speed of 221 miles per hour. This was somewhat of a vanity project for Lamborghini, and they announced that only 21 of them would ever be made- including one that would be kept in the Lamborghini museum. All 20 sold almost instantly, so it’s now impossible to get one new- the only way you can get your hands on one of these is by convincing a current owner to part ways with it. Practically impossible!! The company released details on where they sold the cars to, with 10 being delivered to the US, seven to Europe, one to Canada, and two to Asia. It was so popular that two years later they designed a roadster version, again producing only 20 cars, and this time costing 2.1 million dollars. Still, both versions are incredibly rare, and would make a great addition to any one’s collection of supercars. 4. Honda NSX “Alex Zanardi Edition” The original Honda NSX, known in America as the Acura NSX, was produced by the Japanese company between 1990 and 2005, and looked to be the last mid engine sports car made by them, until they resurrected the name for a successor in 2016.

In 1999, a special edition “Alex Zanardi” version was produced to celebrate the driver’s back to back CART championship wins for Honda. Only 51 were built, one of which was a press car, and they were only available in New Formula Red. It had an all aluminium body, and a 3.2 litre V6 engine which produced 290 brake horsepower, which allowed it to reach 60 miles per hour in 4.5 seconds. The first off the production line was given to Zanardi himself, with the rest being sold through dealers in the US. It’s not known how much they would sell for today, but with standard Honda NSX’s still commanding around 160,000 dollars, it’ll likely be lot more. 3. 1996 Ferrari F50 GT Every list of rare and desirable cars has to have a Ferrari, and here’s one of the rarest of all- the Ferrari F50 GT.

The car was originally designed to take part in the BPR Global GT series, but the F50 project was soon cancelled because competitor manufacturers, such as Porsche and Mercedes, designed much faster and agile vehicles for the championship. Still, 3 F50’s were made- one of which was a prototype, and 2 which were to be sold. With a 4.7 litre V12 engine that provides 750 brake horsepower, it can reach 60 miles per hour in a lightning fast 2.9 seconds, and hits a top speed of 235 miles per hour.

Perhaps it’s the legend of what might have been, but never was, but despite never taking part in a single race, the F50 reached legendary status with Ferrari fans. In 2013 one of these was up for sale with an asking price of 2.9 million dollars. While that’s a lot of money to most people for a car, it’s an absolute bargain for such a rarity, and a piece of Ferrari history. 2. 2005 Maybach Exelero The 2005 Maybach Exelero is a stunning piece of engineering, and was originally built for Fulda, a German tyre company, to display its products. It weighs in at 2.9 tons, but with a V12, twin turbo engine that generates 700 brake horsepower, it hits 62 miles per hour in 4.4 seconds and reaches a top speed of 218 miles per hour.

Only one of these cars has ever been built, and while that may seem surprising- it makes sense when you hear the price. Brand new it cost 8 million dollars. It was put up for sale in 2005, but it took until 2011 before the rapper “Birdman” decided to buy it. It turned out to be too costly a purchase for him, though, so the deal seemingly fell through- so, if you have a spare 8 million lying around, you might just be able to get your hands on this one. 1. Captain Nemo’s Car And finally number one and without doubt the most unique car in the world, and one of the rarest. If you think it looks familiar, then that’s probably because it was used in 2003’s “League of Extraordinary Gentlemen” movie starring Sean Connery. It’s the car used by Captain Nemo, and needed to be extravagant. It was designed by the production designer of the movie, Carol Spier, and is fully functional- if not entirely road legal. It’s 22-feet long, and has a Rover V8 engine. It began life as a Land Rover, which was modified with a steel frame, and covered with an ivory coloured fibreglass shell.

Taking inspiration from the Hindu god Ganesha, there are aged gold embellishments across the entire vehicle, and a faux leather interior. The six 28-inch wheels are mounted on hydraulics so you can adjust the ride height, and it was designed to drive in such a way that special effects weren’t needed in the movie. There are only 2 in the world after an enthusiast built one of his own. Surprisingly for such an elaborate and unique vehicle, the original sold at auction in 2015 for just over 30,000 English pounds- which is about 40 to 45,000 dollars.

By far the rarest and the cheapest on this whole list! Let us all know in the comments below!