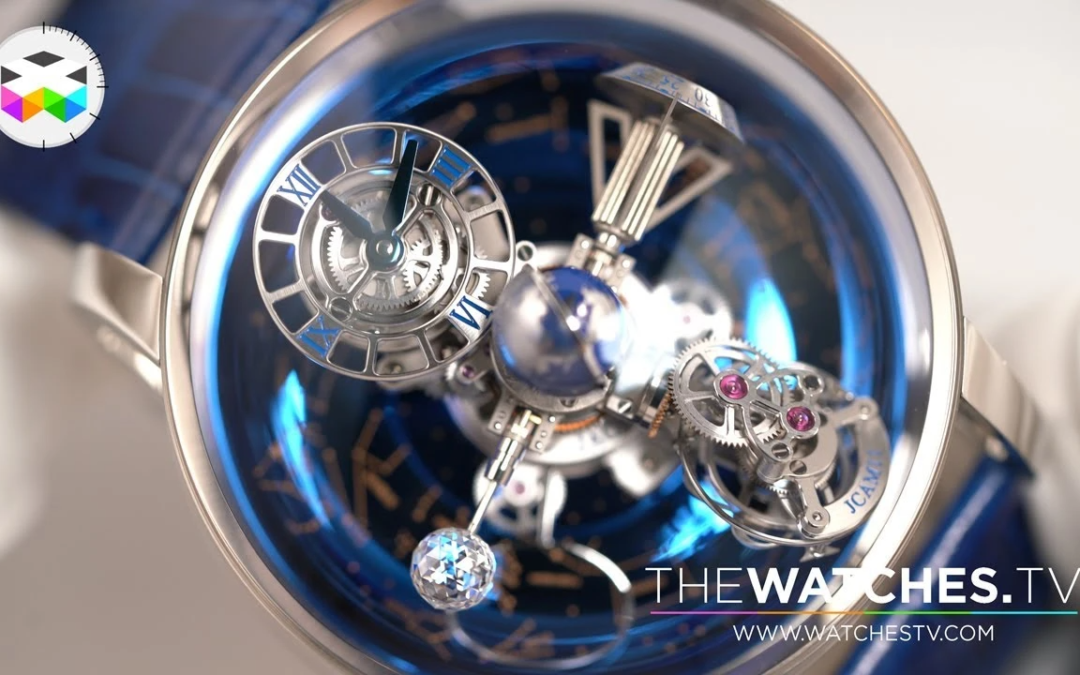 Today we’re even going just a tad further with the Jacob & Co Astronomia Sky, a rather daring, bold and spectacular timepiece, and to make things simple, I chose the platinum version limited to 18 pieces, I like platinum and blue, of course. So as you can see, my birthday present seems pretty big and let’s go for some proper unwrapping. Big cardboard box and when I open it you discover a pretty odd object facing you. I will now put my gloves and remove what looks like an asteroid and place it on the table. So not everyday that you will see such a watch case for sure.

You have a screen here and by pressing this button, a film starts going over the main features of this timepiece, but enough teasing, let’s see the real thing and to do so you move this little lever on the top and an aperture like mechanism let’s you discover your Astronomia Sky hiding in the core of the asteroid. Let’s take it out. So the box was big and the timepiece is also pretty big, 47mm in width and a spectacular 25mm in height, but there’s a lot happening in there and let me summarise what we have and I almost don’t know where to start. So first of all you have to imagine that this timepiece’s movement is made out of approximately 400 component and on a central vertical axis you have a cross shaped structure onto which 4 modules if I can call them like this are attached.

You have an hour and minute openworked dial, with blue floating hands, but what you have to imagine is that the cross shaped structure of course doesn’t stand still like this, it makes a 360° turn on itself in 20 minutes, meaning that naturally the dial also has to pivot on itself to keep the 12 hour mark always on top at 12 o’clock. Opposite of this fancy mechanism, well another little complex mechanism with this multi axis tourbillon with the first axis turning on itself in 60 seconds, the second one in 5 minutes and the third axis in 20 minutes, since the full cross shaped structure moves like I just mentioned.

So one thing important to note is that these two mechanisms are opposite of each other not only to balance things out visually, but more importantly they balance out their weight, something naturally extremely important and it’s the same idea regarding the other two features found on this pretty crazy structure. On one side you an orbital seconds indicator and opposite of this one, it’s also in a certain way a second indicator, but a very special one, since it uses one of Jacob & Co’s signature diamond cut simply called the Jacob Cut Moon and you have a perfect diamond sphere with no less than 288 facets, probably the most craziest disco ball I have ever seen and is super complicated to execute by some master jeweller and you do have to remember that Jacob & Co is first known for its jewellery. Anyhow, to achieve this, they will start with a pretty big 4 carat diamond and they will slim it down to 1 carat in the process and I can promise you that looking at it with the micros is quite spectacular.

Just imagine what it takes to attach it perfectly, to center it on this axis which like I said turns on itself in 60 seconds too. Ok, but obviously the show doesn’t stop there. In the middle, on a vertical axis you will find a day and night indication with a hand engraved and lacquered titanium globe which rotates on itself in 24 hours, but it’s also part of the 20 minute tour of this entire floating mechanism, so in a certain way, you can mention 2 axis too. Ok, but let’s not forget the name of the timepiece, Astronomia Sky, because yes you will also find sidereal indications. As you can see at the back of these satelite like / international space station vibe, well you do find a map of the sky seen from the northern hemisphere and this entire map turns on itself in a full year.

This implies that you have kind of a date indicator seen between the lugs at 6 o’clock. In this case and as the map moves in an anti-clockwise direction to mimic what is actually going on up there, well here you can more or less say that we are in mid-end of July, so not super precise, but sincerely this is not the point with such a timepiece. So additional this, you also have an oval shape component which zooms in the constellation that you can see above your head at this very moment. So yes, quite a timepiece, a bit more than simple watchmaking, actually crazy watchmaking if I can say so, a full show on your wrist to look at and definitely a talking piece, not necessarily super discreet, but you know what, why not?? There is a playful dimension with such object, bt I have to admit that is super well made, you feel that a lot of care has been put on some high-end finishing and this see through case is really quite something.

Ok, so how do set this one up? Well the team of Jacob & Co has made your life just a bit easier, since you can download an app which will pretty simply tell you what to do. So first of all you determine where you are located, in this case Geneva, no I am not on my super yacht in the middle of the mediterean sea, but here at TheWATCHES.club.

Press the Set up button and you will see what needs to be done. Flip your watch around and you can see two kind of crowns. So to wind the watch, just turn this left crown and once fully wound, you will have 60 hours of power reserve for this tourbillon watch beating at 3Hz and that’s seriously not bad considering all what is happening in there.

And now let’s set up the central globe indicating day and night. To do so, we use the second crown and turn it in an anticlockwise direction, but that’s when the app becomes really useful. By pressing this button, the app will simply show me where I need to align my globe. I just have to compare between the two and I’ll be right. Quite handy right? For time setting, I use the same crown, but this time in a clockwise direction and this is pretty straight forward. Ok next tricky indication regarding the date and at 5 o’clock on the back side you will find a small gear like wheel and you just turn it around till your month indication corresponds and for the last indication, your sidereal time, the app proves again to be very useful and by moving the wheel at 7 o’clock, the oval on the dial side will move and you again make it match with what you see on the app and now this timepiece is fully set.

Like I mentioned in the intro, this timepiece in its platinum execution is limited to 18 pieces, but there are a few other interesting variations of the Astronomia Sky, but just wanted to add the Astronomia is a full collection by Jacob & Co, some of which are slightly bigger. So if this was not spectacular enough, well you know that you can add a few millimeters with some other functions or executions if required. So I know this is exuberant, probably over the top for many, but nonetheless I really like that we see some crazy machines like this and that are also some pretty daring customers that go down that route. Obviously it’s quite a statement there sitting on your wrist, but for some why not!! Ok, I hope you enjoyed this birthday celebration, I’m going back on my super yacht now and see you real soon and a massive Viva Watchmaking to you, crazy watchmaking that is.