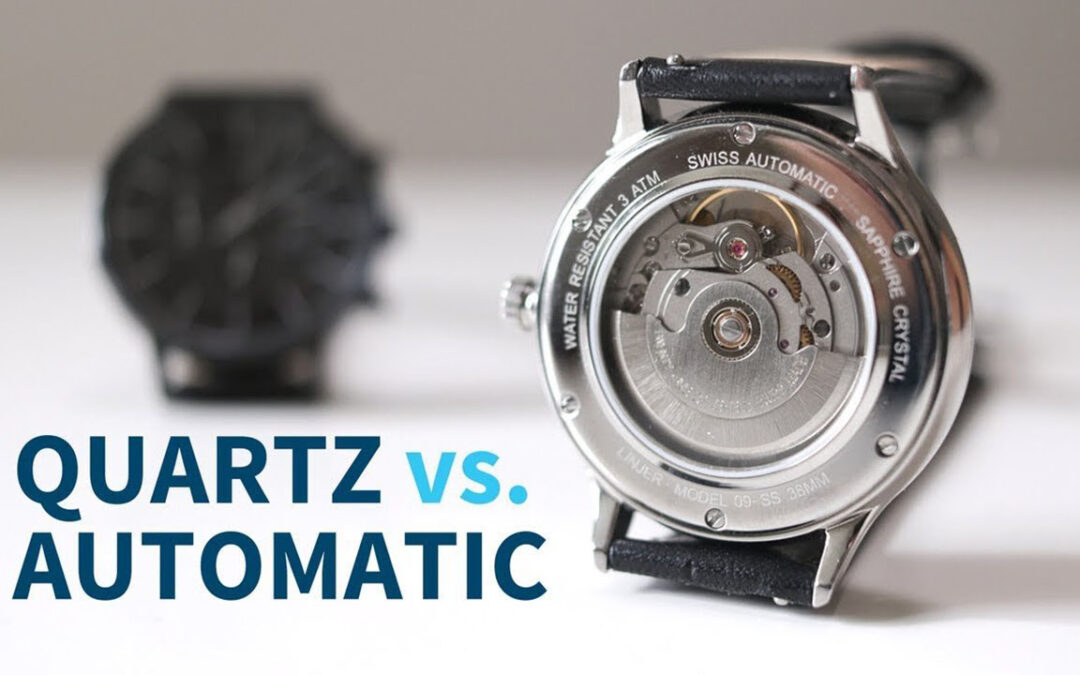 Today we’re talking about the differences between quartz, mechanical and automatic watches.

Okay, most men buy watches in the same way that a teenager might buy their first car. They base it on aesthetic appeal. You know, does it look cool? Do I like the color or do I like the brand Do I feel like it represents me? I mean even people who buy high end watches like Rolex’s often just buy because the cachet that the brand has. You know because it’s a fancy kind of high end prestigious brand. They’re not necessarily buying it because of the materials or craftsmanship or the movement. And there’s absolutely nothing wrong with that.

There’s nothing wrong with buying a watch just because you like the way it looks or even because it’s trendy or it suits your personality or whatever. But if you’re trying to buy an heirloom quality piece something that you could hand down to your kids you know it’s worth looking inside the watch and figuring out what makes it tick. Just like cars have engines that make them run, watches have actions called movements that make them tick. Now watches come with three different types of movements. You have quartz which is battery powered, mechanical and automatic. Let’s talk about quartz movements.

So quartz became super popular when they were introduced by Seiko in 1959. In fact, they almost killed the mechanical and automatic watch industry because they were so cheap and so accurate and so easy to mass produce. You know of quartz watch breaks you’re probably not going to pay to have it fixed, you’ll probably just replace it. And really the only maintenance that you need is you have to swap the battery out every two years or every five or even 10 years when the battery inevitably dies. Quartz watches are very, very accurate.

They’re almost always more accurate than mechanical or automatic watches. But let’s be honest most of us aren’t wearing watches because we really have to know the time. We have the time on our smartphones and our pockets. We’re wearing watches as an accessory. As a piece of jewellery. And so even though quartz watches have the advantage over mechanical watches and that they’re more accurate it’s not really a deal breaker for most people. The reason most people buy quartz watches and the reason that so many brands use a quartz movements is because they’re so affordable.

And so chances are if you see in inexpensive fashion watch out there. Chances are it’s using a quartz or battery powered movement. Now for watch collectors who appreciate the artistry and the craftsmanship and the horology behind their timepieces, they’re going to want to look into mechanical and automatic movements. Let’s talk about the mechanical movement. So what mechanical watches are hand wound timepieces that use hundreds or even thousands of tiny little mechanical parts to basically keep the watch running as long as it’s wild.

Many hand wound watches if they’re produced say by Swiss companies with in-house movements they can be sold for hundreds of thousands or even millions of dollars. Thanks to movement companies like ETA which mass produced mechanical movements for many watchmakers, smaller boutique brands can utilize well produced engines that compete with the more prominent luxury watches in Switzerland, Germany and Japan.

So what happens is you have a lot of luxury brands that are really high end using the same actual movements as smaller. younger, more affordable or boutique brands. Now the major benefit of the mechanical watch over a quartz watch is assuming you maintain it and you keep a wound. A mechanical watch will last for a very, very long time, you know, for generations.

Quartz watch will last for a long time but inevitably it’s going to die. You know just like your computer. It’s made up of small, electric components that will inevitably fail. A mechanical watch, on the other hand, if it’s taken care of and if it was built well originally you could hand down to your kids, they could hand it down to their kids and so on. For that same reason mechanical watches are usually worth repairing whereas quartz watches will just get thrown away and replaced. Okay the next step up from mechanicals the automatic movement. These are kind of like the top echelon.

These are the cream of the crop when it comes to watch collecting. The big difference between an automatic watch and mechanical watches and automatic watch will keep ticking even if you don’t manually wind it. So as long as you wear it on your wrist the motion of your arm keeps the watch wound. It does this by using an off center weighted rotor which spins as you move throughout the day and as it turns it activates a ratchet system which keeps the watch wound.

Now the length of the power reserve varies between different models and different brands but it’s safe to assume that most automatic watches, if you take them off at night, put it on your nightstand, it’s still going to be ticking in the morning. Of course when it stops ticking that means that the next time you wear it you’re going to have to reset it.

Alright, so you can get the right time and a date. If it has a date window and then you’re going to have to either wind it, if it also has a hand winding movement or you kind of shake it to get it going and then when you put it back on it will start to wind itself back up with the movement of your arm throughout the day. If you don’t like having to wind and reset your watches you can also put your automatic watches in a watch winder which is just like a little storage device that turns the watch slowly so it keeps the movement rotating for you even when you’re not wearing it.

Now automatic watches are you know top of the line and they can get very, very expensive depending on the craftsmanship, where it was made and how many complications it has. Now, complications are things like a date window, or a power reserve meter or anything that’s beyond just the basic hour, minute and second hand. Now watch companies that make their own movements and house their watches are going to be very, very expensive.

But again you have these brands like ETA that make mechanical and automatic movements that watch brands can buy it to use in their watches. ETA is probably one of the best known movement manufacturers. Their a Swiss company and their movements are widely respected and widely used. There are many very, very high end luxury watches that use ETA movements to power their timepieces. But there are also more affordable watches that use ETA movements. For example, these Linjer automatic watches. They use the ETA 28 24 – 2 which is a very popular and very respected Swiss movement.

This is a workhorse movement. It’s been used in a lot of different watches. It comes in four different grades. But even the standard grade is a superb 25 jewel automatic movement. This movement is used in watches that are anywhere from a few thousand dollars up to like sixty five, seventy thousand dollars. But it’s also used in watches like these linear automatics, they go for just a few hundred. You know just a little bit more than your entry level quartz fashion watches. And if you’re wondering why the prices vary so much for watches that use the same exact movement.

Well, it’s because you’re paying for you know a brand’s name or a luxury item. Think of it this way, if you had the same exact engine in a Kia and a Ferrari, those cars would literally have the same engine even though one cost ten times as much as the other. The only thing that’s different about them is the brand and how they look and the other materials built around the engine.

Under the hood they’re identical. And so you had these younger brands that don’t have the heritage but they’re competing on price with the big luxury players. And I think Linjer is doing a great job at that because unlike a lot of the newer kind of fashion watch brands they’re actually using respectable Swiss automatic movements in their watches along with other higher materials like Sapphire glass and you know full grain leather and stuff like that.

So I think seeking out these younger brands can be a great way to get yourself you know a nice mechanical or automatic watch even with a Swiss movement and higher end’s materials.

The other option is to find the luxury brands but then buy vintage. Buy second hand. So you don’t have to pay that full price brand new premium. And again just to re-emphasize there’s nothing wrong with quartz or battery powered watches, mechanical watches and automatic watches are cool too but honestly the most important thing is that you like the watch that you buy and that you actually wear it.

So don’t let any watch enthusiasts you know make you feel bad about wearing a quartz watch or buying you know a so-called fashion watch. Just buy the watch that you want. For what it’s worth I’m a big fan of automatic watches. There is something about the craftsmanship that went into it.

And so you know I try to wear automatics as much as possible but I do have a few battery powered watches in my collection.

Okay, I hope this helps you choose between quartz, mechanical and automatic watches. If you have any questions leave them down below and until next time stay stylish.