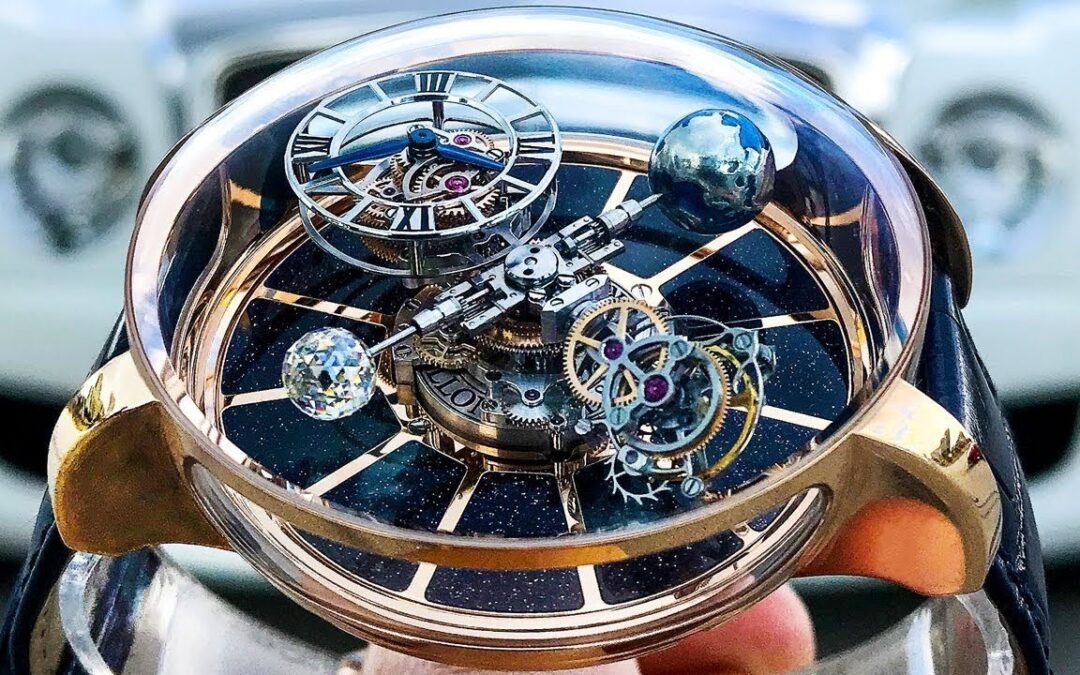 Today I’m gonna be reviewing for you guys the Jacob & Co Astronomia.

So initially I did a video on reviewing Jacob & Co and the Astronomia and how the whole thing how I was talking about how they’ve come a long way and how absolutely, this new design is what has replaced the image in my head of what used to be the Five Timezone watch with the brand and now with this masterpiece the Astronomia. At that moment, I kind of wanted to discuss the design, but I am fortunate enough to have here for you the actual watches to go over them with you.

And let me tell you something, I saw hundreds of pictures on the Internet and hundreds of concept pictures, but there’s absolutely no way can you get the justice it needs until you see it in person. I mean, even for someone like me that has seen shot after shot of macro shots up-close everything. When you finally see it up close and you put it on your wrist, it’s just a whole’nother level.

The first thing that I was looking for when I wanted to see this watch was, I wanted to see the finish, and I realized that they have a flawless finish. Very well made, I mean, it’s all about attention to detail with this type of watch. I just feel like no single detail was left unattended. What Jacob Arabo did along with watchmaker Luca Soprana was just pretty much history in my opinion in the making. This is such an abstract concept and something so out-of-the-box that, for me, it’s just Wow. I mean I finally have them for you today and I wanna go over a couple of different ones with you. So one of the first things that I realize right off the back when I finally had it in my hand was the sheer size of it. I wouldn’t call it massive because there are some watches that I will call massive, but this one just has a good size for being so big because a lot of it is glass. A lot of it is sapphire crystal.

You pretty much have almost a 360-degree view of the movement. So that’s the first thing that I noticed. I said, Man, they’re a lot bigger than they look. Because you’re seeing things on photos on the Internet and stuff like that. So the first thing I realized was the size. By no means that I feel like it was too big, OK? Like some of those older watches that were like way too big, this doesn’t feel like that because a lot of it is transparent.

This particular model here is the Astronomia Tourbillon. It’s limited to 18 pieces and the retail price is $540,000. Something I wanna point about these watches here is besides the fact that Jesus Christ [bleeping] looks like this. I mean, nothing looks like this. This is probably the most unique looking watch of this decade for sure. There’s a lot of engineering that went in there, OK? Everybody told them they couldn’t do it. They made it happen. They were able to develop and execute this watch in two years and for me personally, I find that to be completely remarkable. Just considering everything that goes into it and once you look at it and actually see it function, for me that’s just amazing. This watch is actually rotating on its axis all the way around, so the whole entire thing is spinning around the watch as you look at it. That alone is already like a complication obviously on its own. Some of the things that originally inspired these watches that they wanted a 360-degree view and they wanted it to be inspired by space.

So Jacob himself comes up with the original design concept and then watchmaker Luca Soprana and his team execute it all the way through, and Jesus Christ, what a job did they do! I mean, it’s out of control! This particular model is a 50mm case, rose gold and it’s got a gravitational 3-axis tourbillon, which is…guys you gotta do your homework. Trust me that’s not a standard thing. The first thing that I asked when I saw it is I said, Where is the barrel? Because it’s all so well made and so thought out that I thought, Where is the barrel? But I realized that the barrel is actually in the bottom of the base in the center of the whole axis of this whole system. Something about this watch just feels so outer-space to me that I think they obviously hit the theme right on the head, OK? And, it’s got an actual magnesium ball that signifies Planet Earth and on the opposite end there is a one carat diamond that has 208 facets cut.

Now, this started out as a four-carat diamond, you know a four-carat rock, and by the time it’s cut down to its current state, 1 carat. I’m telling you guys. This is what comes into a crazy watch. This type of work. This type of dedication and you gotta go above and beyond, OK? It has a sixty-hour power reserve and it takes 20 minutes for this to do a complete rotation all the way around. Something that looks pretty slow, when you’re sitting there and staring at it, but as I had a chance to wear it most of the day, it’s pretty interesting because, every time you look at your wrist, it’s in a different position and for me, it’s just…I can’t stop staring at it.

I don’t know what to tell you! The other model that I have for you is the Triangular Baguette Astronomia. This is pretty much the same specifications as the first one I talked about, 50-mm case, all the same things I was talking about. The only thing is it has 24 carats of custom-set baguettes, all in triangular shape and it’s simply stunning. I mean, something about this watch as I noticed it today is that I’ve never seen a watch with so much ice, but it is done so tasteful, like, I don’t know how to explain it. Maybe it’s obviously the cuts, but it just doesn’t look like a fully-flooded watch. It has so many diamonds, but I guess the way that it’s all incorporated and it’s all the background and the lugs, I feel like it’s pretty amazing the way that they executed so many diamonds. Here on the sides is almost like transparent. It’s all in there. The background is amazing because when you look at it, in between every one of those triangles, is another two triangular cut baguettes, making each one of those triangles.

With a retail price of $1.3 million is obviously for some of the more serious players in the Watch Game. And one thing I wanna point out is that both of these pieces being crazy watches seem to be more like watches you would probably wear a handful of times a year or maybe once or twice a month. But then we go on to the 44.5 millimeter Astronomia Solar Planets. Now, this particular model definitely caught my attention. The first thing that came to my mind when I saw it and I wore it is I said, You know what? This is the crazy watch that’s a daily driver! That’s just kind of the effect that I got from it. It has a little bit more of a shorter profile, little bit smaller case and it just didn’t seem as delicate as the other ones, OK? That part of having a crazy watch…they’re gonna be a little bit delicate.

It’s not gonna be for every day, but this particular watch for me seems to be the one that you could just wear every day, day in and day out if you want to, you know? It’s up to you. At this point, you do whatever you want with these watches. Now, this particular watch has something that the other ones don’t have. It’s a totally different design. It doesn’t have the gravitational, triple-axis tourbillion. It’s a little bit different. Still the whole system turns around in a counterclockwise movement, but in the background it’s got the planets of our Solar System turning in a counterclockwise. So, there’s a lot going on there. You got a rock in the middle that represents the Sun and then you got Earth rotating all the way around. I mean, are you guys listening to what I’m saying here? This is not your average description of what a watch should be.

This are definitely crazy watches. I wanna also point out that every single one of the planets are not just…this isn’t just enamel or resin put on there. These are actually natural, exotic, precious stones. And overall, I just…once I saw these watches in persona and I looped the finish, I’m actually pretty impressed. And this is just something that I know, not just anyone will have access to, but take it from me. I am a tough critic. I’ve seen a lot of watches. I have an open mind to crazy watches in all, but you know when sometimes you see something and you hype it up so much and then when you see it, you’re kind of disappointed.

This was not the case with the Jacob & Co Astronomia line. Now, one of the things I wanna mention which is pretty remarkable is that the Astronomia is actually water resistant up to 30 meters. I mean, who would have seen that coming? I mean, honestly I didn’t think that this watch was even a water resistant to 3 inches, but believably, it’s actually water resistant to 30 meters and I think they did a really good job in executing that feature. I mean, not that you’re gonna be taking this water diving, because I know how some of you guys get, but it’s just pretty impressive that it has all of that being such a crazy watch and such as an abstract design, yet it still managed to be water resistant. Alright, so as far as the Watch Game goes, I mean do I really have to go there? I don’t think so! This is pretty much you’re bringing an F-22 Raptor to a knife fight with this right here.

This just…we don’t even have to go there. You’re killing the game if you got one of these.