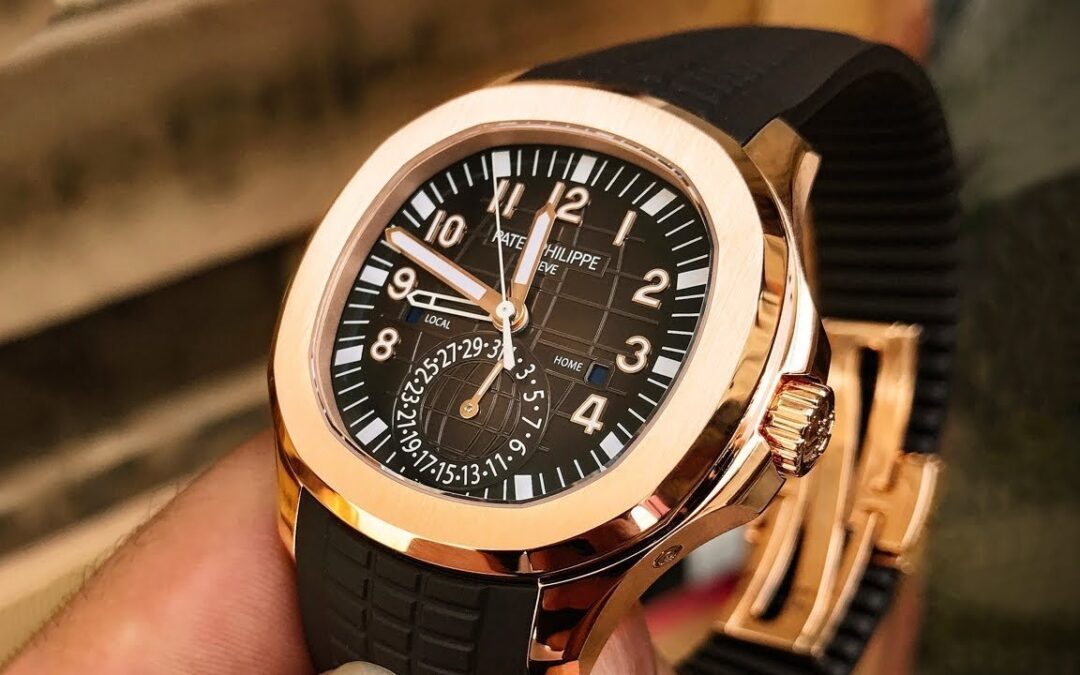 Today’s review is gonna be on the Patek Philippe 5164 Aquanaut in rose gold.

So Patek, Patek…what are we gonna do with Patek? I mean, it seems nowadays like every single model is just taking a ridiculous premium for any of their watches. And one of the main reasons is just that they are probably right now one of the strongest brands in the market as far as brand preservation. They just don’t simply make enough watches and that keeps the demand always high on every one of their models.

So take for example this Aquanaut.

I mean it’s got several design cues that come off of the Nautilus, which of course will always grab my attention, but it kind of sounds like a dive watch. You’re thinking it’s something that’s meant for the water with this rubber strap and such a name like “Aquanaut!” But the reality is I don’t think I would put this watch into the water.

It’s just not really for that. I mean, I label this watch actually the Billionaire Submariner. That’s kind of what I call it, because realistically it’s probably the most sporty watch in their line-up. With the rubber strap, blah, blah…all this and that. It’s a good looking watch. I don’t know if I’ll take it over a Nautilus, but it sure as heck is one stunning looking case. It’s got the same kind of polishing themes as the Nautilus, which also kind of goes through most of their sports models, but one of the main things that I like about this watch is the improvement of the Dual Time.

The original 5167 for me was way too thin. I did a review on it originally and I actually wore one for about two weeks on a NATO strap and that’s what changed it for me. Something about that rubber strap that they have on the factory case of the 5167 that leaves it for me a little bit too thin.

Of course, with Patek is conservative, conservative, conservative. You’re not gonna have a tall watch. This is not an AP. It’s also not a Rolex. Something very refined. I always tell people that for me AP is like a Ferrari, whereas Patek is more like a Rolls Royce. More elegant line, smoother finish, something more sleek? You understand? It’s not so much like a sports car. I love the layout of the rose with the chocolate. I don’t understand how many more people are gonna call me. They obviously are new to the brand and they’re gonna ask me if they can get it in black.

I’m like, Guys, they don’t make it! Plus, why the heck would you want it? I mean, this chocolate looks great. Sure you could probably buy a strap for the steel version and put it on here in black, but I kind of wouldn’t. So for me the 5164 was actually a flawless finish because the watch is a little bit thicker and a little bit bigger and it gives it that right fit on your wrist.

Now, the only thing that I don’t like about this watch and is something that also is in the Nautilus 5990 is the fact that it’s got these buttons on the side to set the second hour hand. I mean, it’s not a big deal. This one actually is a bit less chaotic as the 5990 because the 5990 hits very easily. But I don’t know the solution to it, but I just kind of find it very easy to change the time accidentally. I mean at the end of the day who really cares? Your main time is always gonna be set on the watch. You could make adjustments. Just watch the alcohol and watch the time closely because you might switch it without knowing.

The 5990 is one that’s played for that and several people have mentioned it to me even after I mentioned it, because that’s one thing that I noticed right off the back. It just stuck out too far to adjust the second time zone. But other than that, the watch is a great watch. I guess it would be something like if you had a 5980 on a strap that’s more like for a dress-up occasion, this would be more of a jean and shorts type of guy or who knows what the hell people are wearing nowadays with these watches. But if you wanted to have a watch for the summer and you wanted it to be a Patek and you were gonna like lightly splash it, this is probably the one to have.

So let’s talk about pricing. Has a retail price of $51,000 and pretty much is gonna be hard to get it nowadays at that price. I mean, right now at the moment they’re going from the mid 50’s to about the $60,000 range. Nowadays there just isn’t enough watches and there’s a lot of demand for these pieces and I said it earlier, Patek is probably the best one at that whole supply-and-demand game. They just simply will not make enough watches.

They could have thrown out another 250,000 units of the 5980 on a strap, but they just done. I mean, that’s just the way it is. I’m hoping one day they’ll come out with a 5990 rose gold on a strap and that’s probably gonna look killer. But if you’re looking to pick up one of these, you need to have either a really good relationship with your local AD or just be willing to pay a little bit over premium. And Patek is one of those brands that I would never have a problem paying over retail. As far as the Watch Game goes, I mean you pretty much can’t have a more elegant sports model watch.

It’s not a loud watch. Some of the guys would tell me that Patek is an old man watch. Yes and no! I mean, it depends how you wear it. Me personally, I’d rather have an AP, but in the Watch Game myself, if I saw something like this, I obviously recognize and know what it is. This isn’t your grandfather’s Patek. This is obviously something modern, futuristic and is the new style heavy stuff. So it’s obviously anything rose gold in the Patek Game is obviously is gonna be good in the Watch Game.

So feel free to comment below how you feel about the Patek 5164.